Love's triumphs and tribulations
in a dual-gendered world.

Back to Home Page

Most bonds evolve with time. But a precious few begin even before  birth.

In the dual-gendered realm of Ylandre, the great divide between the high-born True Bloods and the lower-ranked Half Bloods is deemed impassable by most. Rohyr Essendri dared to cross it when he took young Lassen Idana from his provincial town and made him his paramour.

Lassen perforce learned how to navigate the intricate byways of life at court. What he never expected, however, was to fall in love with Rohyr, a most inadvisable and impractical thing to do when one’s lover is sovereign ruler of the land. But anything worth having is worth fighting for, both figuratively and, as Lassen discovers, literally speaking.

Time and circumstances may force true lovers apart but the tie that binds them can never be fully severed.

When Dylen Teris and Riodan Leyhar meet one harsh winter in the dual-gendered realm of Ylandre, neither expects the encounter to lead to a fast friendship and abiding love. The chasm of vastly dissimilar social stations lies between them and not all Deira could imagine, let alone accept such a relationship.

Circumstances eventually separate them for what seems forever only to conspire to bring them together once more in the most unlikely of places—at the court of Rohyr Essendri, Ylandre’s powerful monarch. Complicating their situation is the attraction that still lingers between them, waiting to flare once more into love. But when one is unwilling to venture his heart again or wholly forgive its breaker, it may take a king’s interference to reunite these star-crossed lovers for good.

From the moment he laid eyes on the handsome Lord of Ilmaren, Naeth Orosse fell head over heels in infatuation with him. And after that first meeting in the middle of a tavern brawl in the dual-gendered realm of Ylandre, Reijir Arthanna did not forget the orphaned youth who came to his aid unasked. When fate brings them together anew, Reijir becomes Naeth’s guardian, which proves both blessing and bane when their mutual attraction is guilelessly nursed by one and distrustfully downplayed by the other.

Between attempting to ignore Naeth’s artless overtures and suppressing feelings he had long disavowed, Reijir has his hands full. But more than a title and duty were forced on this enigmatic cousin of Ylandre’s king. A less than benevolent past has left its imprint on Reijir who is as known for his cynical outlook on life as he is for his exotic features and proficiency between the sheets. Convincing him to risk his heart in love is a battle more experienced Deira than Naeth have waged and invariably lost. 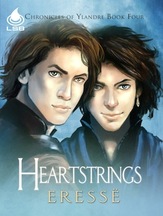 When all else comes to naught, a steadfast heart is the only thing that stands between hope and despair.

Scions of the most powerful House in Ylandre, Ashrian Mithani and Eiren Sarvan were more than just cousins. Lovers of long standing, theirs was a bond that would have been the envy of all were it not for one glaring flaw—Ashrian’s inability to commit himself wholeheartedly to Eiren. Despite the dismay of some and the derision of others, Eiren bore his inconstancy; displaying a loyalty Ashrian seemed incapable of returning. That is, until Ashrian crossed a line and the transgression proved one Eiren could not forgive.

In the wake of grief and remorse, Ashrian seeks to make amends and win Eiren back. But something stands in his way. Or rather someone. And the irony of it all is that Ashrian can neither hate nor help befriending the Deir who is his rival for the heart of Ylandre’s most beloved physician. 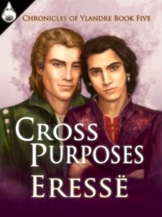 With love, the line between happiness and heartache is all too easy to cross.

One of Ylandre’s most prominent nobles, Keosqe Deilen may have had it all in terms of wealth, power and social rank. But in matters of the heart, he was impoverished. Such was the consequence of falling in unrequited love. Though he hides that love and his sorrow well, a few inevitably see through his masquerade.

Young Tristen Marante is quick to discern Keosqe’s pain. His blunt sympathy is a balm to Keosqe’s wounded heart as much as his beauty is an effective distraction from the noble’s hopeless yearning. But Tristen is a skittish would-be lover, whose reluctance to express his affection is as much an impediment as the lack of reciprocation from Keosqe’s first love had been. Whereas Keosqe seeks intimacy, Tristen shies from it, suspicious of the motives behind his pursuit and unwilling to yield his heart so easily or soon.

With such different perspectives toward lust and love, is it any wonder their path to a common goal is strewn with stumbling blocks and paved with false impressions? 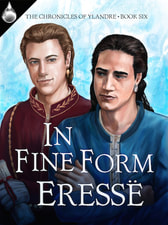 Guile is an asset in foreign relations, but an affliction when it comes to affairs of the heart.

A bastard of unknown parentage, Yandro Vaidon was born saddled with a huge disadvantage. The nigh rigid class structure of the dual-gendered realm of Ylandre relegated him to the bottom rungs of the social ladder and promised a dim future. Worse, the endeavor to win respectability was arduous—most claimed it was impossible. But by dint of hard work, perseverance and instances of plain good luck, Yandro rises higher than even he had hoped. However, he quickly learns there are hurdles to overcome even at these heights. Not least is his inconvenient attraction to a colleague deemed way beyond his reach.

Scion of House Essendri, the reigning dynasty of Ylandre, Jareth Hadrana is gifted with more than his fair share of beauty and wit. The kingdom’s preeminent ambassador, he has surpassed what is usually expected of a fief-lord’s second son. But while his high birth and family wealth opened doors for him, Jareth’s success stemmed from his own efforts to make something of himself other than the idle fop or swaggering rakehell that was the lot of many younger sons.

A coincidence of interest drew Jareth and Yandro to the same profession, but a king’s intervention throws them together in an association that soon turns into mutual desire. However, prejudices have largely kept the aristocratic True Bloods and lower caste Half Bloods on opposite sides of the social and romantic divide. In addition, reticence born of distrust and a secret like no other hamper their attempts to span the chasm between them. It will take more than their shared passion to convince them to lower their protective walls and risk their hearts in full. 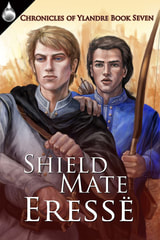 The respect of many pales beside the regard of one who matters above all else.

Ranael knew his obligations to family and society. As a scion of Ylandre’s most powerful House, he was destined for a life of service, albeit a privileged one. As the son of a wealthy fief-lord, he was supposed to bed or wed as befitted his station. With obedience to authority ingrained in him since childhood, Ranael hewed closely to what was expected of a royal-blooded aristocrat and a military officer. Thus, defiance of the strictures of his position never entered his mind. Until he came to covet Vaeren Henaz.

​Vaeren did his duty to king and country despite attempts to put him in his place and keep him there. A survivor of neglect and frightful adversity before and after he fled the orphanage wherein he grew up, Vaeren refused to let his illegitimacy or lack of sufficient lineage stop him from fighting his way up the ranks of Ylandre’s hidebound army. Nor did he allow anything or anyone to trample on his dignity or his heart. Until he learned to love Ranael Mesare.

​In the dual-gendered realm of Ylandre, two warriors of nigh irreconcilably dissimilar backgrounds battle their way through the vagaries of military conventions, social censure, and personal vendettas. All while struggling with an attraction that contravenes the traditions and expectations that shape life and love in the world of Aisen’s most powerful nation.